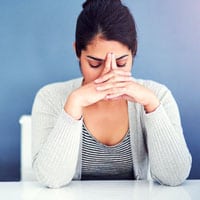 Premenstrual Syndrome (PMS) is a medical condition characterised by a variety of physical and emotional symptoms felt by women before the onset of menstruation. The symptoms of PMS are cyclic in nature, generally beginning at or after ovulation (release of an egg by the ovaries), and continue until menstruation begins. Typically PMS begins from about 7 to 14 days before menstruation and ending within 24 hours after menstruation has begun.

Research suggests that as many as 75 percent of women of child-bearing age have some degree of PMS. It seriously affects the lives of about 10% of women, often requiring time off from work or school. PMS is most common in women in their 20s and 30s, gradually decreasing and ceasing entirely at menopause.

There are no objective tests (physical, biochemical or endocrine) to assist in making a diagnosis. Therefore PMS is diagnosed by recording symptoms for several menstrual cycles in a symptoms chart. This is partly because the retrospective reporting of symptoms is inaccurate and because significant numbers of women who report PMS have other underlying problems such as perimenopause, thyroid disorder, migraine, chronic fatigue syndrome, as well as psychiatric disorders such depression, panic disorders and anxiety disorder.

Symptoms that occur in a predictable pattern (starting before menstruation, and then disappearing when it begins) are usual indicators of premenstrual syndrome. A doctor may perform a physical exam, if necessary, to rule out the possibility that symptoms indicate the presence of disease.

Treatment of PMS involves finding the remedy or combination of remedies that work for each individual.

The majority of women with PMS can be treated simply by general practitioners or by self-help. A lot of unsubstantiated claims have been made for the supplementation of calcium, vitamin E, magnesium, dietary change, vitamin B6, evening primrose oil, exercise, yoga, acupuncture, psychotherapy and many more. There is very little evidence that any of these treatments for PMS are effective with the exception of exercise and cognitive behavioral therapy.

Despite the fact that non-medical treatments are of doubted efficacy, they are generally harmless. They can be tried before resorting to medical therapy as there is no risk, except in severe cases where patients may be delaying therapy. St John’s Wort has been shown to be effective as an antidepressant and could possibly be tried as a self-help measure in PMS though there is no valid evidence (it must not be taken with SSRIs). Also Doctors often recommend vigorous, aerobic exercise because it is thought that exercise stimulates the body’s release of various neurotransmitters, supplementing those that are at low levels.

Broadly speaking, treatment of PMS should generally be achievable either by suppressing ovulation and the endocrine cycle either pharmacologically or by surgery or it may be achieved by altering the sensitivity to progesterone by elevating serotonin levels.

Suppression of the ovarian cycle eliminates PMS effectively. This can be achieved by GnRH analogues with add back tibolone. Oestrogen also suppresses ovulation and eliminates PMS without menopausal side effects. Intrauterine progestagen (as levonorgestrel IUS) avoids re-stimulation of premenstrual syndrome at the same time that it protects the endometrium; it reduces periods and provides contraception.

Other medications used to treat PMS include diuretics (to ease fluid retention), oral contraceptives (for hormone control), and anti-anxiety medication, for extreme irritability. SSRIs are the simplest and most effective non-hormonal approach to treatment. Some consider them to be first line medical therapy. Women with premenstrual dysphoric disorder usually require antidepressant medications.

PMS can cause havoc in a woman’s sex life. Because the symptoms include emotional fluctuations as well as physical discomfort, neither the woman nor her partner knows what to expect. Some women find that their energy goes into symptom management, and they become self-absorbed. They tune in to their bodies but tune out their sexual feelings and, many times, their partners too.

Most of the women face premenstrual syndrome every month before their periods begins. This is a combination of a wide range of symptoms which are physical or psychological. These PMS symptoms are experienced every month when ovulation happens till the start of the...

END_OF_DOCUMENT_TOKEN_TO_BE_REPLACED 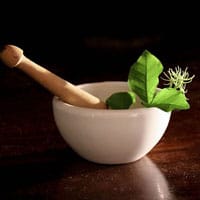 How To Treat Premenstrual Tension Syndrome With Herbal Remedies

Premenstrual Tension Syndrome, or just Premenstrual Syndrome as most people know it, is a set of various different symptoms that may occur right before your menstrual period. Some of those symptoms could have to do with changes in your mood or your concentration...

END_OF_DOCUMENT_TOKEN_TO_BE_REPLACED 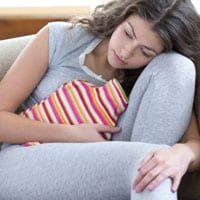 Premenstrual syndrome or simply called PMS describes a pretty complex condition in women. It is a generic name given to a bunch of different symptoms that affect a woman for part or the entire period comprised between ovulation and period. These symptoms are both of...